La Mania spring/summer 2014 collection was to be presented at the Grand Theater in Warsaw. It called for an outfit which would marry fashion with a theater evening out. I chose a little black number from Banana Republic, which I bought in London a few months ago and never yet wore. It is a very simple dress with a subtle glamorous twist, created by the light reflecting sequins. To complement the dress I picked Louis Vuitton black vernis open toe pumps with pad lock and a Minaudière Petit Bijou in dark tortoiseshell color. This Art Deco inspired jewel box is a beautiful accessory. It can literally fit a credit card, a key and a lipstick. But what else does a lady need when going out? Apart from, perhaps, a handsome suit-clad man? I made sure I had this ‘accessory’ on me all evening… 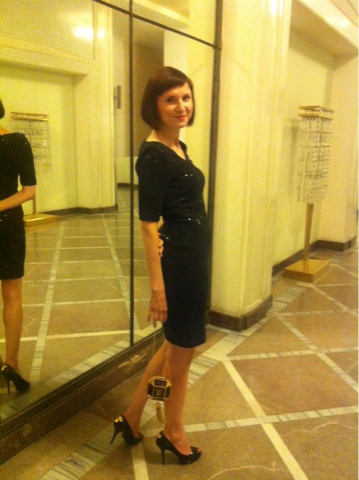 Striking a pose in the foyer of the Grand Theater. 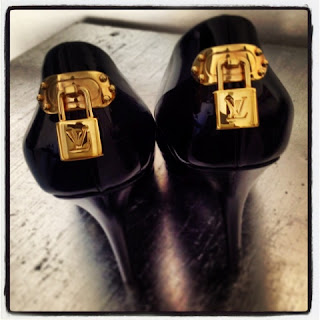 These sexy peep toe high-heeled platform pumps are amazingly comfortable to wear. The back is accessorized with a golden LV padlock inspired by Louis Vuitton leather goods. 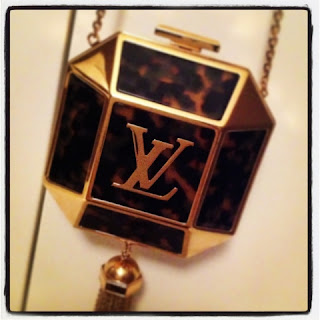 The Minaudière Petit Bijou simply says ‘evening glamour’. Embellished with shimmering golden brass Louis Vuitton initials, the unique bag is inspired by the facets of gemstones. Wear it and you will make an impression at any event. 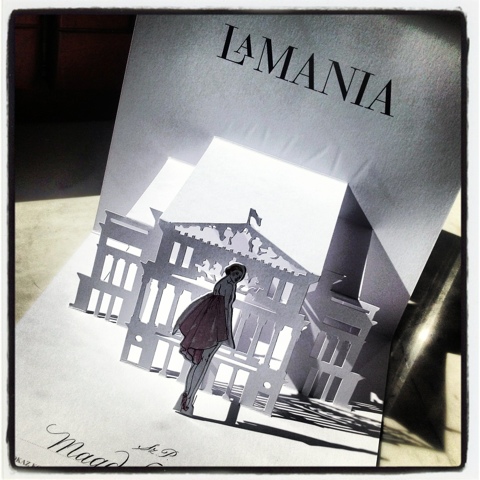 Last night La Mania unveiled its fifth collection during an amazing spectacle. I’ve been to all their shows so far, including the one in London earlier this year, which was more like an art exhibition. Putting together an outfit for La Mania’s evening is always a challenge and a pleasure:) After a little deliberation, I went for a black dress and accessorized my look with a lovely headpiece by Anna Pieta and my favorite L.K. Bennett’s heels. 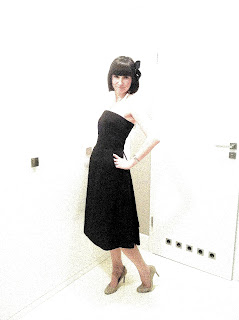 The show was spectacular-spectacular! (to use the famous quote from Moulin Rouge movie). It started off quite daring and scaring – well, at least for me – with a ballerina suspended on a long line, from a very high ceiling, in a breathtaking interior of Ufficio Primo. It did take my breath away. Literally. I paused and prayed for her not to fall down. She didn’t. Instead, after performing air ballet, she ascended to the top and disappeared through the hole in the roof. I was relieved… 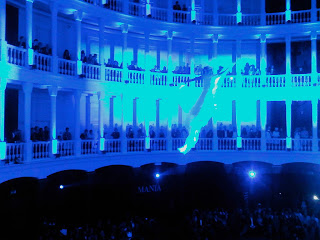 After a truly Hitchcockian start, the fashion show began. The first part showed more innovative numbers, the second remained true to La Mania roots. There were a lot of signature cream creations, paired off with quite a few black ones. Even Joanna Przetakiewicz, creative director of the brand, who usually goes for a white gown, wore a simple black dress, with angle wings embroidered on the back. White tuxedos (very YSL!) and deep-red dresses added a nice sexy touch to the collection. 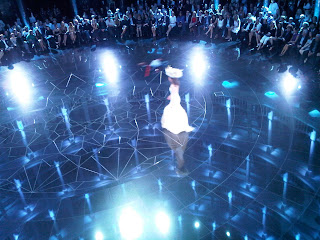 The show climaxed with a golden rain of confetti in the shape of angel wings. I couldn’t help but whisper – heavenly! Can’t wait until the next show. Until then, I’m going to hold on to my golden wing I kept. For luck. 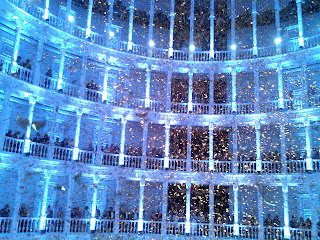 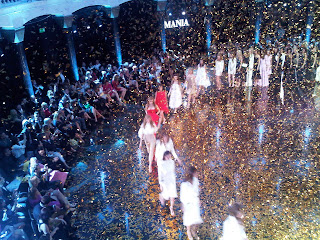 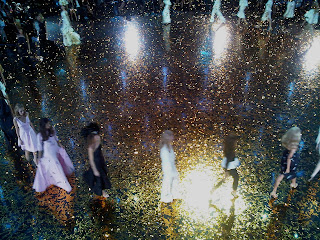 It was a flying visit for me but one which made me fly. On Thursday La Mania launched in London during a glamorous bash held at the Royal Academy of Arts. 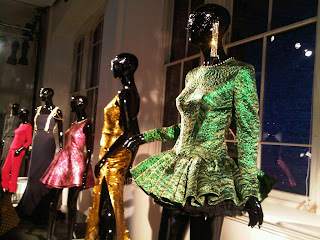 La Mania A/W collection is all about vibrant colors
Art was indeed on the menu, along with prosecco, pomegranate & elderflower cordial and mini doughnuts (it was Fat Thursday, a traditional Polish feast celebrating last Thursday before Lent). As for art – we were treated to the works of Marco Perego, an Italian-born, New York-based artist. It seems as though Marco has no awareness of his international fame, since during the evening he was keeping a very low profile and had to be called for three times, before he showed his face. He’s got no reasons to be hiding though, as his pieces are already gracing private collections of such fashionable names as Giorgio Armani and Dolce & Gabbana. 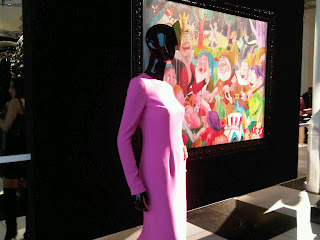 Where fashion meets art: La Mania’s pink gown
posing against Marco Perego’s painting
Speaking of big names in fashion, La Mania enjoys one-of-a-kind blessing by the mighty Karl Lagerfeld. From the label’s fashionable launch in 2010, Mr Lagerfeld has been offering guidance and inspiration to Joanna Przetakiewicz, the creative force behind La Mania. I was hoping to see Karl at the event but apparently he had to attend something very important for Fendi. Like it couldn’t wait… Oh well, even without Lagerfeld it was a fabulous, glamorous and oh-so-chic-night! 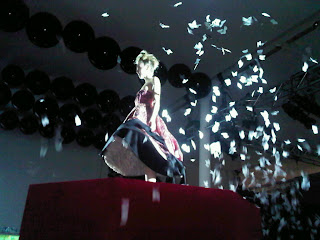 La Mania’s signature performance – the unveiling of a model
and butterfly confetti
I wish La Mania a thrilling success in London! It has quite a few well-wishers, some of whom showed their faces at the launch – fashion critic Joanna Bojanczyk from Rzeczpospolita daily, Katarzyna Niezgoda from Deni Cler, model Anja Rubik, designer Robert Kupisz and even former Polish President Aleksander Kwasniewski, to name a few. Not to mention numerous representatives of the Polish business elite.
The exhibition Fairy Tale Mania, presenting La Mania Autumn/Winter 2012/2013 collection. is open to the public until the end of February at the Royal Opera Arcade Gallery, 5b Pall Mall, London SW1 (free entry). It represents Poland in the International Fashion Showcase project, organized by British Council and British Fashion Council as part of London Fashion Week. 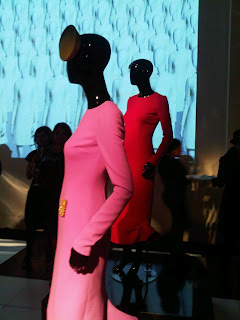 Color + glamour = La Mania
If you’re in London, do see it. As Alex Butt wrote in British Grazia: Remember the name ‘La Mania’. You might need it in future.

For a review of the event in Polish, visit my friend’s blog GraBlondyn… 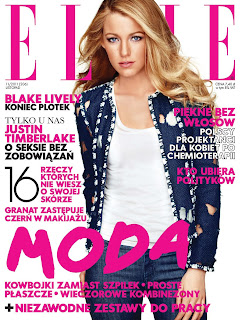 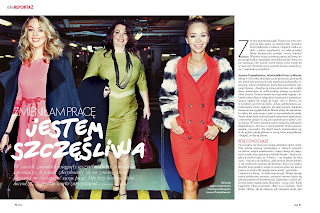 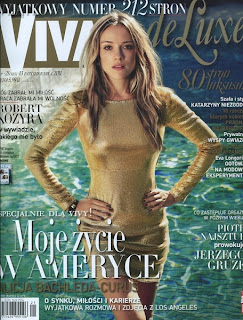 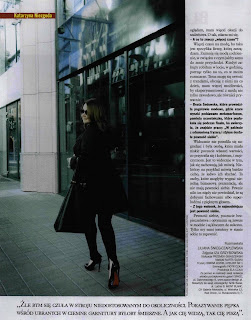 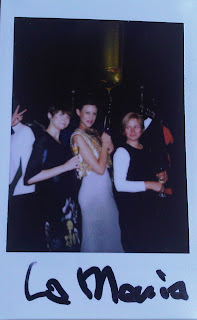 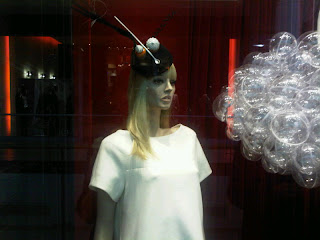 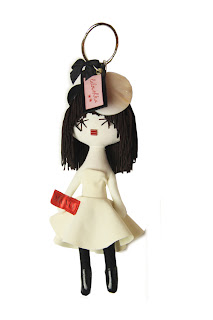 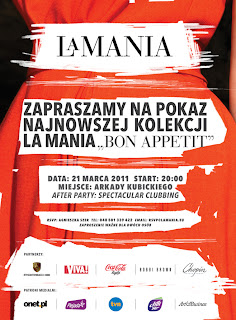 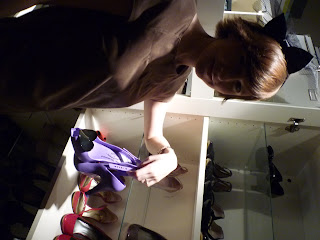 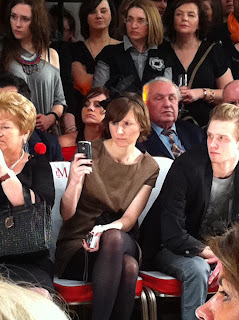 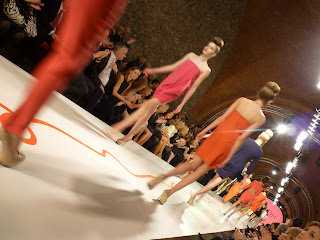 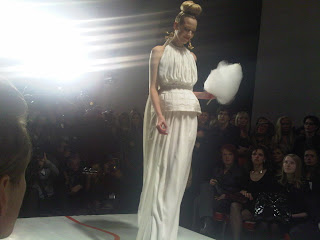 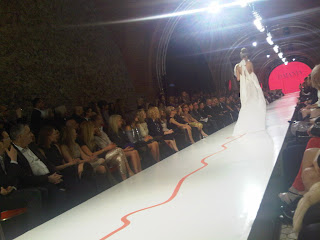 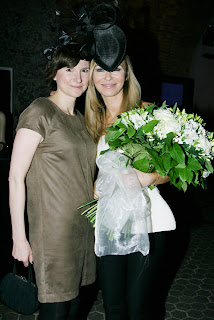